For those who don’t know, I’m a proud core organizer of the Rust LATAM conference. 🎉 The conference happened on March 29 and 30, and this post describes how it was to organize the whole thing.

Even with the small problems we had (as any other big conference), the feedback we received so far were very positive. We were able to bring amazing speakers to the conference, which brought high-level content even for beginners. 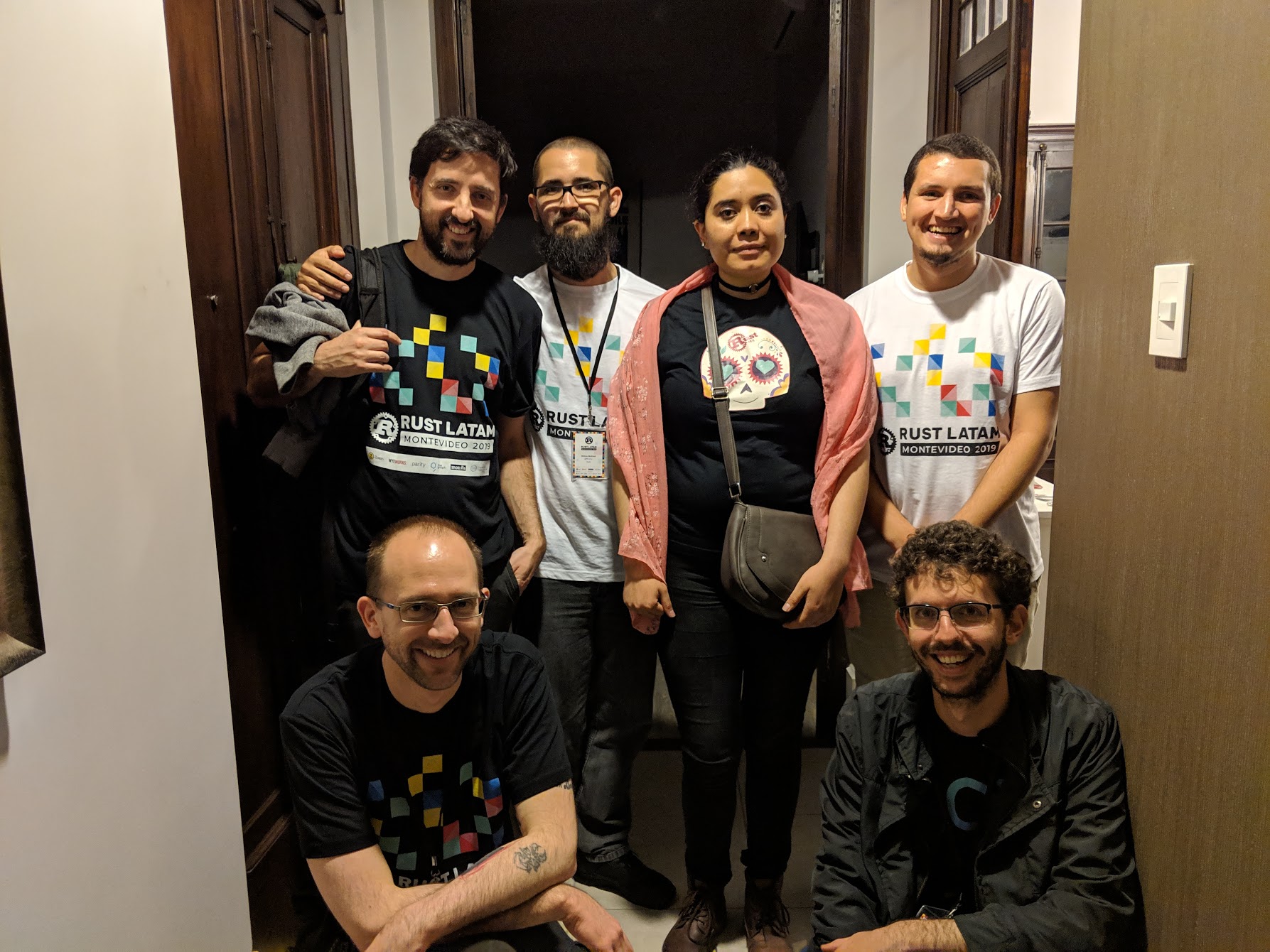 This post does not name people because I don’t know how much they feel comfortable to be mentioned here, but there’s someone that needs to be mentioned, and this person is Santiago Pastorino. As the conference happened in Montevideo (Uruguay), Santiago was the main organizer and main contact to everything local to the place. He was the one doing the heavy lifting for most of the things related to this conference, and he has my full respect for that (and many other things).

Don’t get me wrong, we (other organizers) did some hard work too and I would mention others by name. We joined in different stages of the conference organization and committed ourselves in different levels, Santiago was the only one who started it and was there until we delivered it with the same level of commitment, that’s why I decided only to mention him by name.

I made some new friends while organizing this conference. It’s great to see how you become friends with someone after you spend some days doing hard work and feeling the same pains and joys. At the end of the conference, I felt I knew these people for years already, and it was just 4-5 days working together. Of course, we had many interactions via internet, but it didn’t happen to all of them, and it was less intense. I would say that the level of commitment to the same cause is proportional to the bonding of the friendship.

We generated a chart about the demographics using the data from everyone who attended the conference. Here’s the data we have for that: 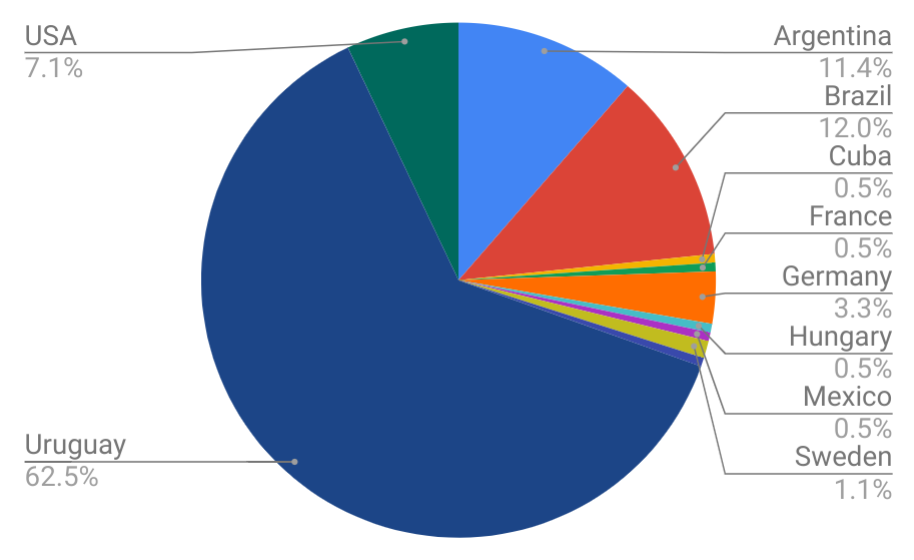 Errata: After the conference someone noticed that Mexico was not included in the legend of the demographics chart when we presented in the opening speech, so I’m posting the right data now. It was my fault, sorry Mexico! The Rust LATAM community loves you! 🇲🇽

60%+ of the participants were Uruguayans. We were expecting that already since many of them were students. We did (Thanks Santiago!) some presentations at local universities to promote the conference and the language.

We didn’t have any problems with any of the attendees. Everyone behaved as expected for the standards of the Rust community and I hope many met some new friends to exchange information about Rust.

Rust still has a small community in LATAM, but we’re trying to make it better with this conference. :) 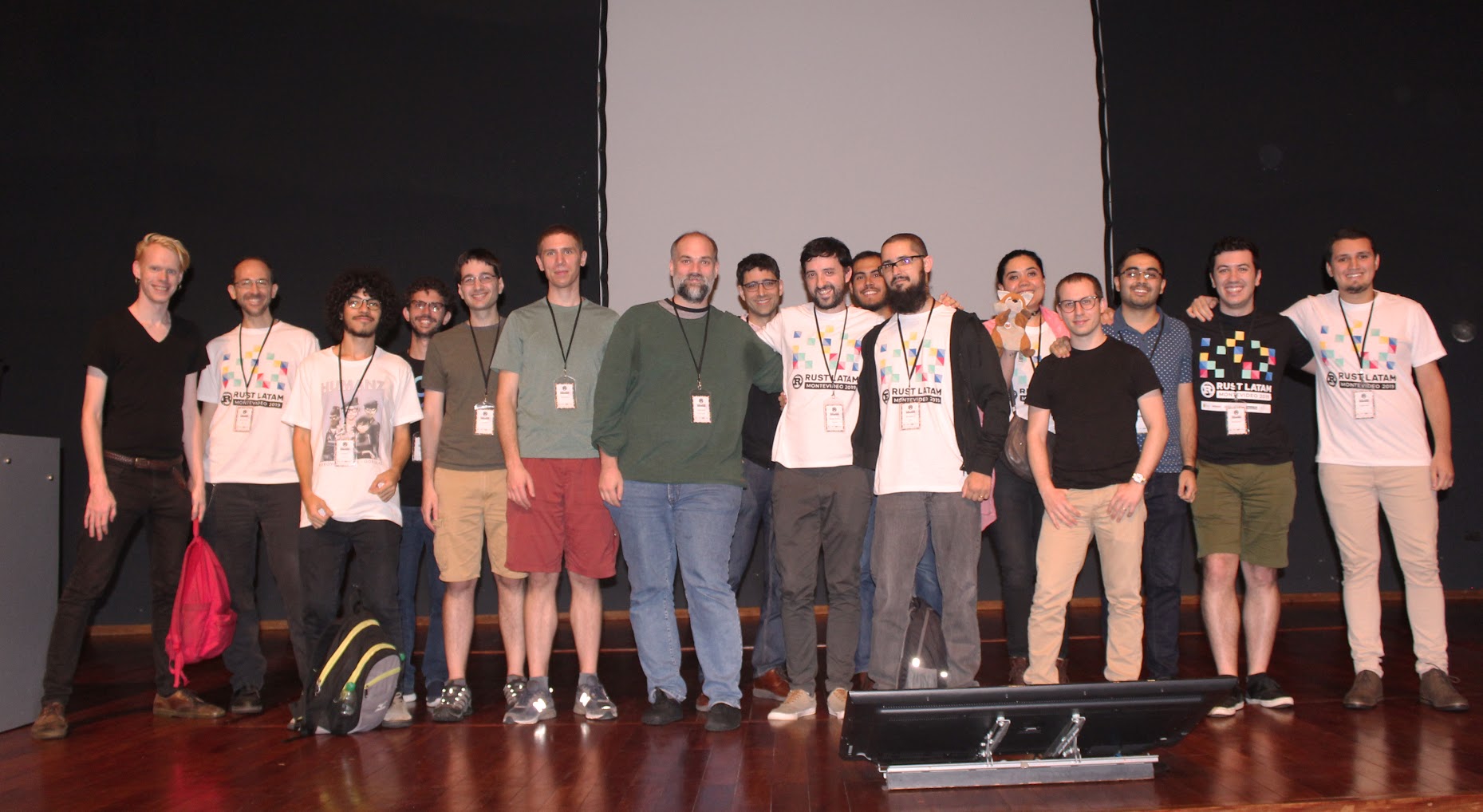 Here I’m also counting the workshop speakers not only the ones who were speaking on stage on Saturday.

In the end, everything ran smoothly with the speakers. One speaker was not feeling well during the conference and we were worried about this person and also for the possible slot e would have to fill but the speaker was able to deliver the talk (which was great, BTW 😁).

All speakers performed great (even when Apple Keynote decides not to cooperate 😜) thanks a lot to all of you that gave us your time and knowledge to make this conference happen. ❤️ 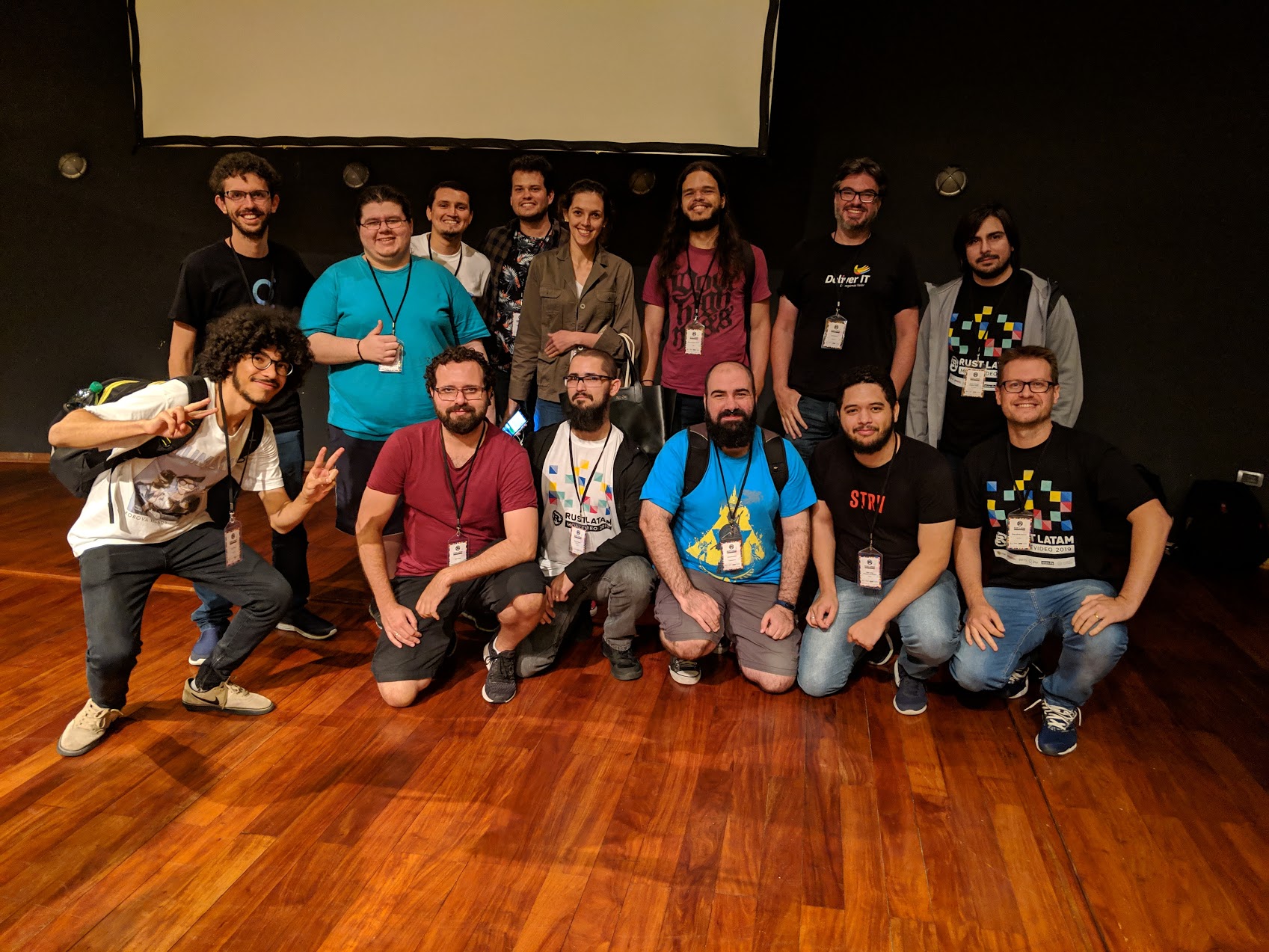 For those who don’t know yet (for some reason), I’m Brazilian. It’s not so common for people in Brazil to go to different countries (I may be generalizing, but that’s my feeling), mainly because Brazil is so huge. I was amazed to see we had more people from Brazil than people from Argentina there. 🎉

It’s a common thing to have this “Brazil x Argentina” thing (because of soccer…), so I was joking about the number of participants. To be honest, I was happy to see that we were considering each other as fellow programmers of the Rust LATAM community and not people from country X or Y.

We have a Rust Brasil chat on Telegram that has 600+ members. There we have members from many different Brazilian states; it’s a place to unite all the local meetups like Rust-SP (São Paulo), Rust-BH (Minas Gerais), etc. It was the first time we had a more significant meeting where people from different places could come to meet and talk to other Brazilian Rustaceans. We had an internal joke that it would be the first meeting of Rust Brasil…in Uruguay!

The whole conference went well. We feel that people are satisfied with what we were able to deliver. We collected some feedback and the general feeling was excellent.

It seems we were able to do everything on budget as well, so we didn’t have to spend our own [personal] money to deliver the conference and help speakers and organizers to get to Uruguay. This was only possible because we had amazing sponsors to help us with that. Thanks Rust LATAM sponsors!.

We were able to deliver a pre-conference meetup, one day of workshops, and one day of talks. Considering the size of the team and how busy we were, it was almost a miracle (IMO). 🎉

The venue for the conference was great. We didn’t have any problem at all with it. Thanks a lot to Antel for providing it.

Problems we had and What has to improve

Of course, there were many problems. The simple ones, the complicated ones, the funny ones, etc. We hope they were not apparent for the participants and speakers. :)

Number of organizers and commitment

We had fewer organizers than we wanted to have. Some of us were able to commit more than others, so we had to bring more people to the core group of organizers. Some of us had to leave the group in the middle of the process because they were too busy with other things; others were there but not able to do much. This whole situation made everything even more difficult.

Next time we should probably get more people and more commitment in the beginning so it will be easier to afford losing people in the process without overwhelming everyone.

We had some problems related to food and the usage of one of the workshops place. We paid for something and it was delivered in a different way than what was agreed. There was probably some miscommunication in the process, but it’s hard to know how much of it was on purpose or just unprofessional.

The initial plan was not to have any wokshop, but we were considering having one done by us. In the end, we got awesome people to deliver workshops, and we could have spared ours.

After some discussion, we thought it would be great to deliver our workshop still because there were many students enrolled and it would be a good thing for them. It proved to be accurate because it was the biggest workshop we had.

The only problem is that it had to be delivered in Spanish and we had just two native Spanish speakers organizers attending the conference. Santiago became the responsible for the workshop.

The problem of having Santiago doing the workshop is that he was already doing all the other things that needed someone from Uruguay and didn’t have enough time to work on it. We slept less than we wanted and finished the whole slides and exercises together in the day before (which reminded us of our university times! LOL).

We already had the content for the workshop, but now Santiago was “trapped into a room” for the whole day. Many things were only known by him (contracts, discussions by phone, etc.) because he was the one dealing with locals. Well, in the end, he became the single point of failure of the conference.

We managed to fix everything by covering him during the workshop exercises but it was not an easy task to do.

It was great to have an Intro to Rust workshop, but we did not plan it in the right way. Next time we will probably have someone other than the main organizer doing that! LOL.

Well, we have some interesting stories from backstage to tell you. 😁

Having fun with the language mess

It was hilarious to have Italian, English, Spanish, and Portuguese all mixed up between the organizers and locals. We used English as the lingua-franca between us (where’s Esperanto? :P) but we also had to deal with locals that only speak Spanish (venue, catering, etc.), so we had to switch languages from time to time.

I remember when one of us was speaking Italian to the Spanish speaker organizer by mistake. His face was: “Why is he not understanding me?”. Very funny.

There was also one time when we were discussing the workshop (2 AM) and the Spanish speaker read something in Spanish in an e-mail and after that, this person made the switch to Spanish while we were looking to him/her laughing and trying to understand what he was talking about.

I have to say that I had a lot of fun with these situations :)

We were using a rideshare app to go from one place to another. We had to bring boxes of t-shirts, bags, banners, and other things to the place we were staying. You can imagine that the logistics were not easy.

In one of these rides, one of us took the boxes but forgot to get the backpack from the car before leaving. We tried to contact the driver, but it’s not that easy to do that using this app in Uruguay.

When we finally could get an answer for the driver, he said that there was no backpack there… That’s nothing to do about it other than report it to the police.

Well, it was awful for the organizer (and for the whole conference organization), but it became even worse when we found that this person’s passport was also in the backpack. We started the process of getting a new passport during the workshops day so him/her would be able to get home in time. It’s a long and stressful process.

One of us was out to bring the tablecloths for the sponsors' table. When this person got to the place, it was almost closing, and he/she got trapped into the garage. One of us had to go there to release him/her but this person was able to release [him/her]self before we arrive. :P

Organizing an international conference is tough. It took a lot of my time in the past 3-4 months. There are so many details to consider, and sometimes basic things you consider as done comes back to bite you.

The feeling of accomplishing something that big with positive feedback is something that you take for life. I’m very proud of being part of the team that made it happen.

Well… The best way to end this post is to thank everyone (attendees, sponsors, speakers, organizers, etc.) who were there to make it happen. 🦀 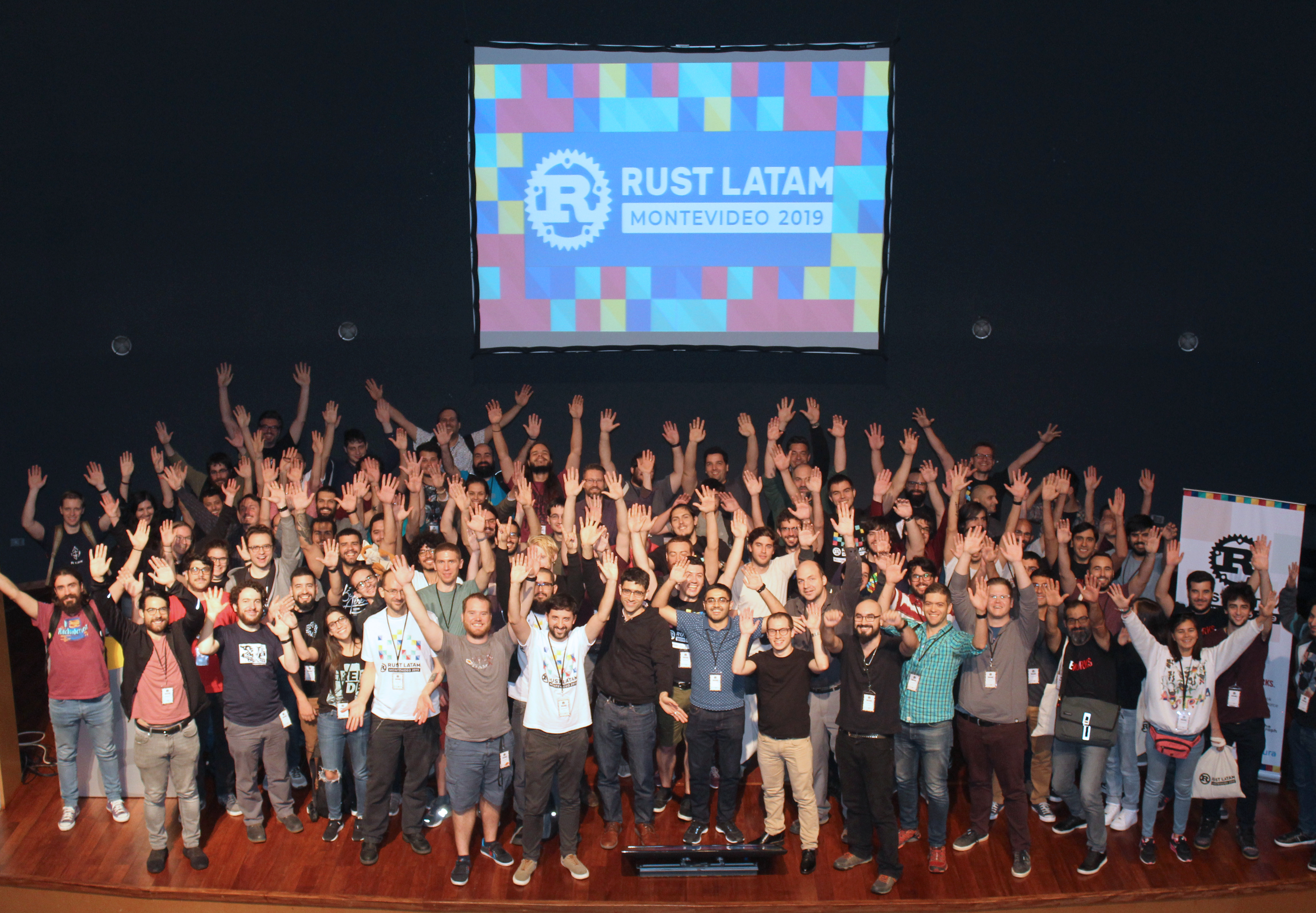