This month was very unusual because I was traveling through Portugal and Spain for work and tourism, so it will probably affect my stats a lot. With that said, let’s see how it is. 😄

I read some pages from Elixir in Action, but unfortunately did not finish any book this month. I usually don’t read that much when traveling, so it’s sad but expected. 😞

As usual, I’m using that same export file from Pocket and the same script to calculate the amount of articles I read:

I think it was a good think to not read my Feedly in a daily basis but weekly instead. I was adding a lot of articles to my Pocket account but was not reading them so it was wasted time. By checking weekly, I can still catch good articles without dedicating daily time for it.

Here goes the charts from Wakatime since the last post. 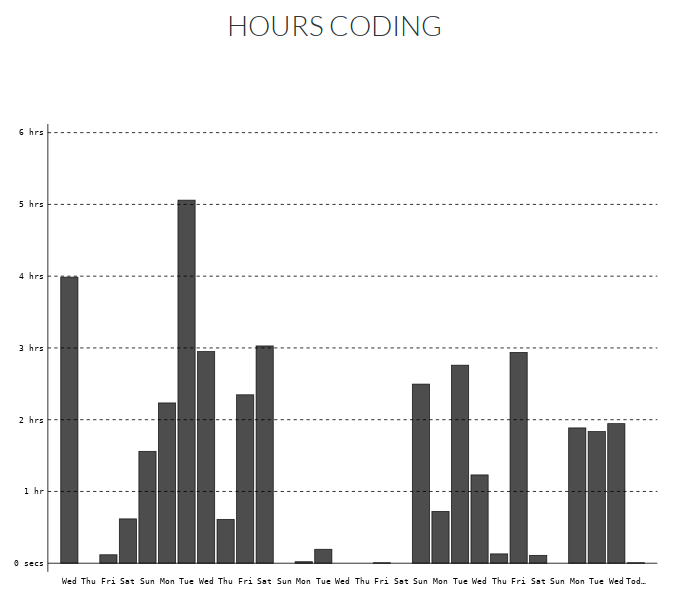 The empty days are related to the days-off I took to walk around Lisbon, Barcelona, Madrid, and Toledo. The first half of the month I was working from the Doist office in Porto and the second half I was working home. It was almost the same, excluding that Tuesday when I worked more than people usually do in the office. :P 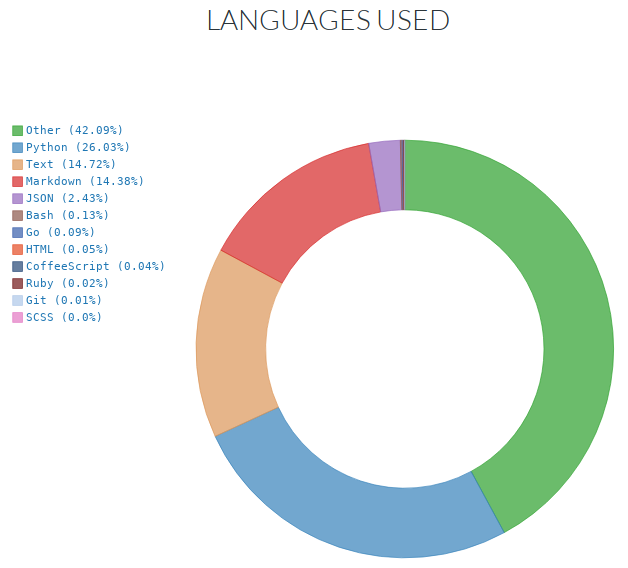 And not it makes sense for me. Bash first and Python right after. :) 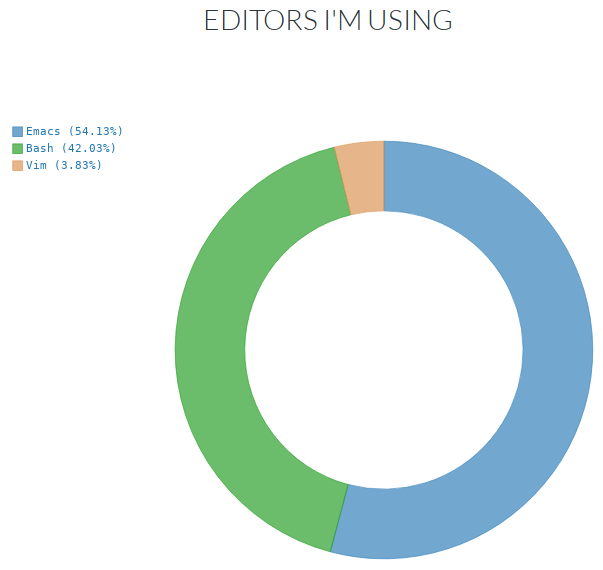 Emacs before bash, that’s nice. It’s kinda contradictory with the previous metric but it’s acceptable given that I can run many commands at once. I’m not sure if it’s a good idea to keep bash here, maybe I will just remove this plugin.

It was really nice to speak at Porto Python in Portugal. It was kinda funny because of the Portuguese differences that I don’t know, so I probably mixed up many words. Thanks to Roman Imankulov for inviting me to speak.

Here is the chart comparing to my goal for this year: 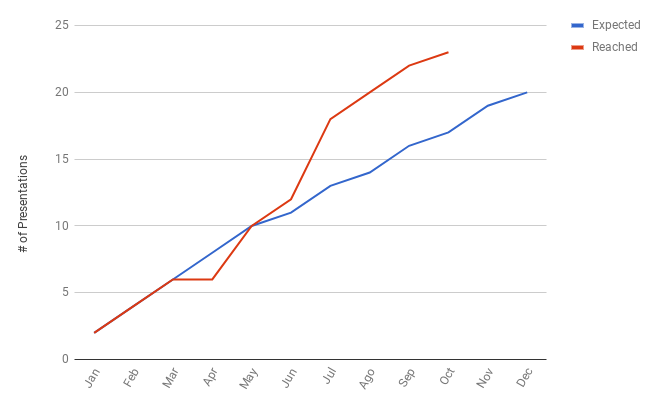 This is the amount of tasks completed on Todoist.

Here is my Podcast Addict stats: 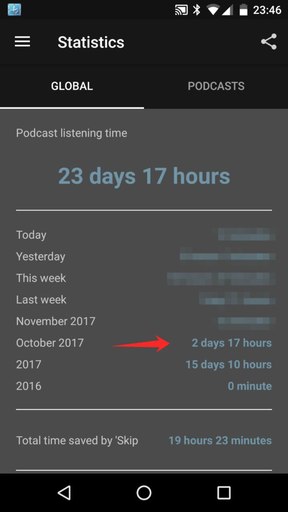 2 days and 17 hours of podcast time, 1 day more than last month. It happened because I decided to catch up to the unheard episodes when I got home. 😄

As usual, here is the list of Podcasts and their times: 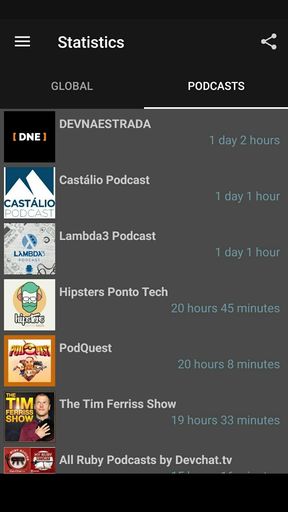 Just remember that this is an “all time list” and I’m tracking time instead of episode which makes short podcasts to not appear as “most listened” ones. I listen to CBN podcasts almost every day, but they are just some minutes long.

Here is the data from my time tracking software, Toggl:

The above chart is just for my freelance and full-time job. As you can see, I took many days totally off. :)

I tried to use Toggl when I was in the office just to compare with my productivity at home. It was almost the same as if I’m working from home, so kudos to the Porto office. :)

There is another chart for my personal projects:

As expected, just the time related to my talk at Porto Python.

I will not post my data related to rescuetime this month because I was working in the fix for my problem and their team fixed the problem. Rescuetime stats will be back next month. :) 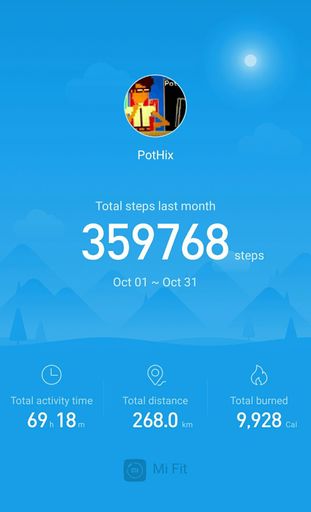 According to this data, I can conclude that I had a daily average of 11.6k steps (359/31). I think mean is not a good aggregation function for this data because when I was traveling I had days like this: 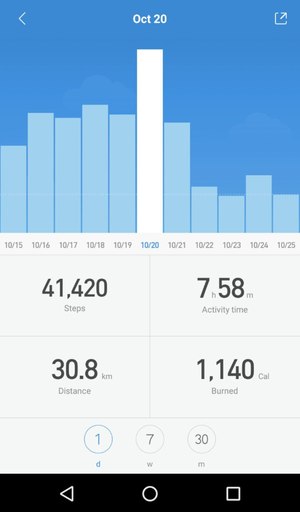 Well… I really like to walk when I’m traveling. :)

Unfortunately, my Google fit is missing some data, so I will not post all charts as usual.

Here is my sleep data for this month: 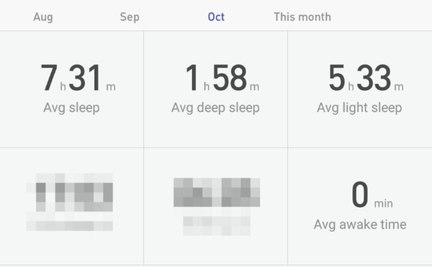 Almost the same as the last month but 10 minutes more for avg sleep and avg deep sleep. There are some comparisons with their database: 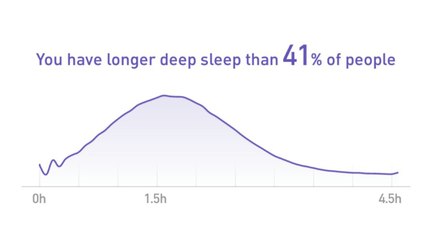 According to tvshowtime I watched 15 episodes this month: 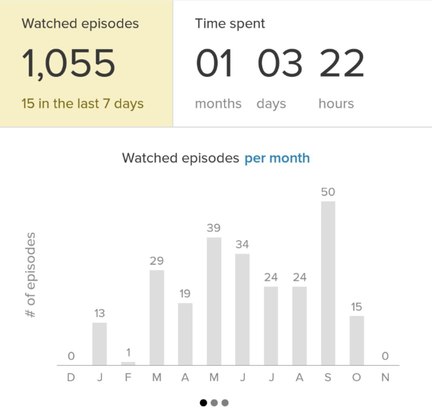 When I got back, we decided to watch Stranger Things (season 2) and get back to Orphan Black (season 3).

It’s still difficult to calculate how much time I spent watching TV this month (because I could not track last month in a good way) but I think I watched 17 hours of TV. I used tii.me to calculate the second season of stranger things and calculated 40 min for each of the 5 episodes of Orphan black.

I’m using Grammarly to improve my English and track the amount of words and errors when I’m writting. Unfortunately, they only send weekly emails, but I will try to keep this metric for a while.

My stats for this month:

This month is really atypical and should not be compared with the previous month but it has its own interesting facts. The last week of October was really interesting. I had a lot of material to compile and write down for my team. For this reason there is a lot of words written.

This section is really nice! 😁 As I said, I visited two new countries: 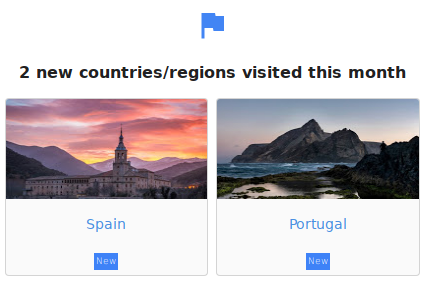 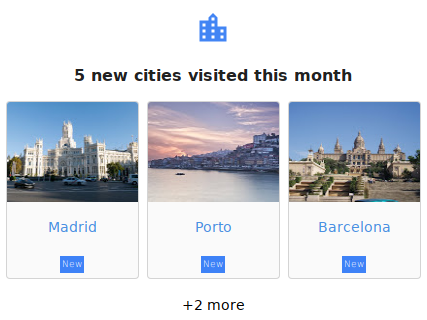 Unfortunately, the email sent by Google timeline was not so descriptive this time. But the other 2 cities are Toledo and Lisbon. 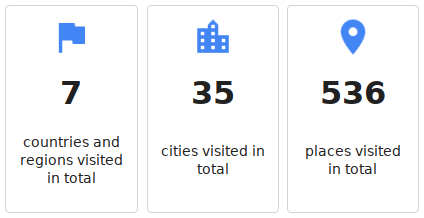 Here is the time spend in vehicles: 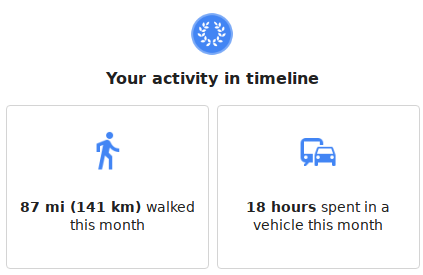 I was expecting more time than that, but it looks accurate in case it’s not considering airplanes. I took a train from Lisbon to Porto (3.5 hours) and a train from Madrid to Toledo and back (1.5h maybe).

Hope to reach the moon some day.

My expenses for this month: 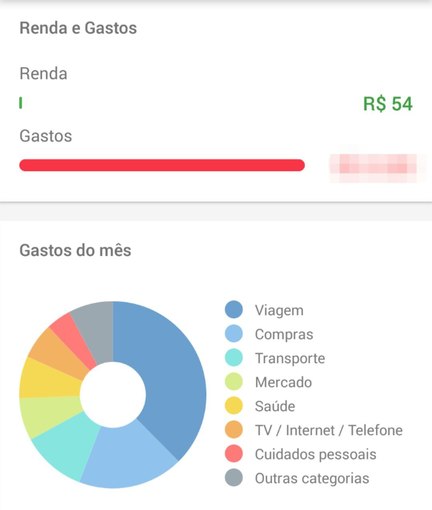 This chart represents all my income for this month. And again, the number is not wrong, I did not receive any money this month. The problem I described in the last four months still persists, for this reason, there’s no money coming yet. :(

Part of the problem seems to be solved and now I’m back to the normal process. Hope to have everything set up this month.

If you’re reading this every month, you already know that my wife is paying all of our bills until my situation gets back to normal and I’m really glad to have someone to rely on when things like these happen. ❤

I traveled to Europe last month and part of the expenses were paid by me to receive the reimbursement for it later. As I’m not able to receive my payment for some time now, it caused a negative impact in my savings.

Some people are asking me about how much time it take to collect all the data and write the blog post, so I decided to add this metric

It took 4 hours and 10 minutes to write this post

It was a great month. I forgot about the whole problem of not being able to receive any money and took the whole month to meet new people and places. 😄

It was really nice to meet 12 people (from 8 different countries) of the team in person and also represent the company at hackUPC.

During this trip I decided to say in hostels most of the time to talk to people from different cultures (and also because I had to pay for it… 😄). I talked to people from Germany, Poland, Spain, Scotland, Colombia, Canada, Lithuania, Czech Republic, Japan, Brazil, Uruguay, Australia, Russia, Ireland, Portugal, India, Belgium, Bosnia, France, Argentina, and Netherlands. It was not just a “Hi, where are you from?”, most of them were 30min+ conversations and some of them took more then 2 hours.

I also bought a sword (a replica of Andúril), but that’s a story for a different post. :D

So…mission accomplished for this month. o/