TL;DR: When traveling to Europe, I decided to take 2 or 3 days to visit Oxford. I will describe how was the experience of a J.R.R. Tolkien fan there.

I’m a big fan of J.R.R Tolkien. Have read most of his books, the ones released when he was still alive and other edited by Christopher Tolkien.

After attending FOSDEM I decided to travel around some countries in Europe and UK. The most expensive part, the airplane tickets (Brazil -> Europe), were already paid, so… why not? :)

The last step of this journey would be London. Then I realized: “Why not to visit Oxford?”. It’s a historical city and Tolkien himself wrote most part of his books there.

I used Oxfordbus company as transport from Heathrow Airport to Oxford center. I choose a cozy house to say via Airbnb for 3 days and 2 nights.

Everything in Oxford closes really early. I got there around 4pm and there was nothing to do anymore. I tried to visit the Bodleian Library, but it was closing. All colleges were closed. The only thing to do is to look for a place to eat.

The first stop for real was Eagle and Child. This was the pub where the Inklings met once a week in the morning. For those who don’t know the Inklings, it was a small group which J.R.R. Tolkien and C.S. Lewis were members. They used to talk about their books in these meetings. The Lord of the Rings had their first drafts showed in this pub, probably. It’s a good place to eat, I liked it.

I was lucky to be in Oxford in a Wednesday, they have extended tours around the Bodleian Library and Radcliff camera on Wednesdays and Saturdays. There were some good stories about it, but unfortunately it’s almost impossible for a tourist to see any of the Tolkien’s manuscripts or original materials. In order to get access to it you need to have the Readers card. In order to obtain it, you have to pay and justify why you need to have access to the them. So… No manuscripts for me.

I went to the Weston Library, where they have a treasury room with a free exposition. There I found a original drawing from Tolkien. But the other manuscripts were already removed because they are planning to close this exposition (as they said…).

Tolkien was a teacher at Merton College, you have to pay £4 to enter there if you want to. After asking about Tolkien places to visit, I found that none of the places I would like to visit in there were open to the public.

From the inside I could see (through the gate…) the rounded table that may have inspired the meeting that created the fellowship of the ring.

I got this picture thanks to my 55-250mm lens, but it is not so close from the gate. To enter there you have to be a Merton associate (or something like that). But is still a good place to visit.

I decided to visit Magdalen College (£5) to walk in the “Addison’s Walk” where the Inklings talked about religion and where C.S Lewis was converted to Christianity. Unfortunately, the wind was causing some threes to fall down and they had to close the place for security reasons.

There was a exposition in the old library of the Magdalen College and it was cool to see the old books. From the times they still had chains in the shelves. :)

There is a good place to find Tolkien books, in case you’re interested. Go to Blackwell Bookshop and look for the shelf dedicated to J.R.R Tolkien.

In the last day, I decided to go to the cemetery where Tolkien was buried (Wolvercote cemetery). It’s not so far, but almost 1 hour walking. There are some buses that take you there easily, just go to the bus station to get information. I like to walk around the cities I visit, so we went there walking. 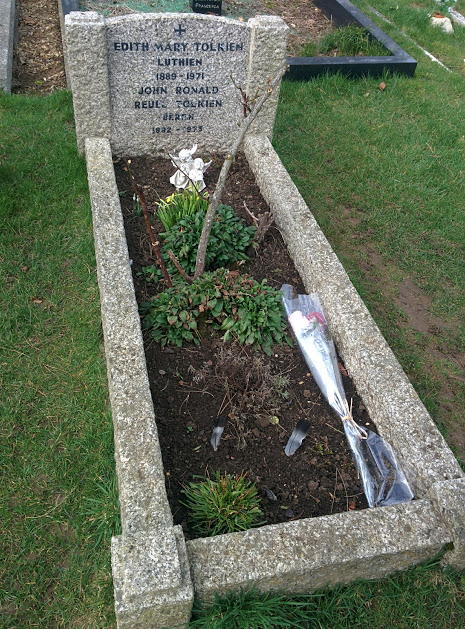 It’s a simple tombstone, nothing spectacular, but I’m glad to get there.

Then we came back walking and passed in front of the house he lived with his family for some time.

Other things around Oxford

You’re already in Oxford, so I recommend you to visit the Blenheim Palace. It’s expensive £23 (go by bus and buy the tickets on the bus because it’s cheaper than buying there) but worth the price. It’s not the Highclere Castle from Downton Abbey, but some rooms were made me think about it. :)

The architecture for all colleges is really impressive, just walk around them if you like it. I’m a big fan of these kinds of architectures, so I enjoyed walking around them and taking pictures (yes, I like photography too!).

Conclusion about my Tolkien Tour

There are some other pictures related to Tolkien in this Google photos album.

I was expecting to see more materials from Tolkien. There were no expositions about him, the only thing I saw was a drawing. I know that all (or at least, many) of his manuscripts are available at the Bodleian Library, but they’re not accessible.

The city do not use the fact that Tolkien lived there as touristic attraction. The only place referencing Tolkien was the Eagle and Child.

But Oxford is a good city to visit. There is a lot of history there. I just recommend you, J.R.R. Tolkien fan, to align your expectations with what is there.